I recently picked up The Picture of Dorian Gray, and was very pleasantly surprised by it. We had discussed Oscar Wilde in high school (the person, not his writings), and he didn’t really strike me as a likeable person. But this guy could write!

A book that surprised me in a bad way was Throne of Glass by Sarah J. Maas. I went into it expecting a book about the best assassin in the country kicking ass, and instead I got 400 long pages on a girl obsessed with dresses and boys who treats murders and kick ass stuff as a by the way this also happened but lets discuss that in one sentence and then go back to the dresses and the boys. 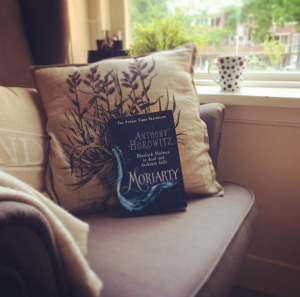 I mainly write my posts in bed, tho I am currently sitting in my lovely, comfy chair in front of the open window.

I don’t watch that many movies to be honest. Uhm… I recently watch The Girl with All the Gifts. It wasn’t a bad movie, but it could have been better… especially with some changes they made towards the ending.

Rarely. But when I do I listen to ‘epic instrumental music’, I guess. Think of movie soundtracks and the like. I found a YouTube channel which has posted ‘The Best of Epic Music 20..’

Suri from Age of Myth is the first person who comes to mind. She is just wonderful and so down to earth, and I understood from Michael J Sullivan himself that she will come to play a large part in the rest of the series. Jeey!!

Miss Hobbes from the Newburry and Hobbes series by George Mann. She is a brave, kind young woman, who doesn’t let herself get dragged down by the expectations of society.

Frankenstein’s Monster, just because I feel like he just needs a cuddle.

Robert Langdon, from the book series by Dan Brown. It would be so interesting to just visit a museum with him.

And lastly, Mina Harker from Dracula. She is just so resourceful. Also, she was bitten by Dracula himself, and survived.

Light thinks it travels faster than anything but it is wrong. No matter how fast light travels, it finds the darkness has always got there first and is waiting for it. – Terry Pratchett, Reaper Man

That’s what a good wife does, keeps your dreams alive even when you don’t believe anymore. – Michael J. Sullivan, Age of Myth

I wanted to be a biologist… and last month I graduated, with a Masters degree in Biology.

With ‘The Biologist’ in Annihilation by Jeff VanderMeer… and why? See the previous question :p Maybe all biologists are the same, but when I let my fiancé read a part in which she describes herself going out with her husband and his friends he just said ‘damn, is this about you?’ Of course, I can’t say I relate to her  in terms of the situations she gets in while being in area X. But as a person I could really connect to her.

Brandon Sanderson and Michael J Sullivan (there have been a few messages between us, and he just seems to be a great person). And now for the tricky ones… Terry Pratchett, Agatha Christie and H.G. Wells.

I had written a few reviews on Goodreads, but wanted more. Then I saw the page of Raven and Beez, and it looked like just had so much fun I wanted to give something like that a shot too.

Too many… but the books I hope to get to soon ish for buddyreads and/or reading challenges are: Around the World in 80 Days, Pride and Prejudice, Illusive (Emily Lloyd-Jones), The Rook (Daniel O’Malley), The Thief Lord (Cornelia Funke), The Serpent’s Shadow (Rick Riordan), The Map of Chaos (Félix J. Palma), Appointment with Death (Agatha Christie), The Executioner’s Heart (George Mann), Hearts of Smoke and Steam (Andrew P. Mayer), Harry Potter and the Half Blood Prince, The Jungle Book, The Magicians’ Guild (Trudi Canavan), The Blue Blazes (Chuck Wendig), Victoria (Daisy Goodwin) and Black Hole Blues and Other Songs from Outer Space (Janna Levin).

Thank you for these great questions Makayla!

These (apart from the first two) are my most recent followers. Thank you so much!!! I would love to get to know you a bit better.

And my questions for you are:

I hope you all are having a lovely day 🙂